The letters “CRO” carved on a tree and the word “CROATOAN” carved on a palisade entrance post were the only signs of evidence John White found of the lost Roanoke Island colonists from 1587. This is how the story of the Lost Colony ends, but where did it all begin? 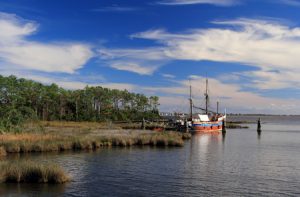 Sir Walter Raleigh’s half-brother, Humphrey Gilbert, was the first to advocate for the English colonization of America. When Gilbert was lost on an expedition in 1583, Raleigh continued spreading and supporting his ideas of American settlement. He funded expeditions to Roanoke Island in 1584, 1585, and 1587, himself staying in England to suit the command of Queen Elizabeth.

Sir Richard Grenville led the fleet to America with 600 men and with Ralph Lane as lieutenant governor. The pair chose Roanoke as the first settlement site, and built up Fort Raleigh and a few houses to get the settlement started. Governor Lane was left in charge of 107 men when Grenville left to return to England. With worsening relations with the local Indians and due to the late return of Grenville, Lane pulled his men out of Roanoke, deserting the island. Grenville left 15 new men to man the fort before leaving again for home.

In the winter of 1586-87, John White took 120 men, women, and children to Roanoke. The 15 men Grenville left were gone with only a single skeleton left beside the fort. The new colonists built homes and celebrated the birth of the first English child born in the New World: Virginia Dare. White left for England in the autumn to obtain more supplies and colonists, leaving the colonists with promise of quick return.

However, war and lack of ships left White unable to return to Roanoke until 1590, and when he landed, the village had been deserted, all of the colonists gone without a trace. Theories and guesses abound as to what happened – perhaps the threat of Spain drove the colonists away into the arms of friendly Indians at Croatan Island, or they lived out their days in the Chesapeake Bay area. No one knows for sure, and the Lost Colony remains one of America’s greatest mysteries.

You can learn more about the Lost Colony and more when you stay with us at Island House Bed & Breakfast of Wanchese! Visit our guest information page to check out the many other attractions you can visit around the area, and as always, we hope you enjoy your stay!